by Michael Mutmansky for the Large Format Page 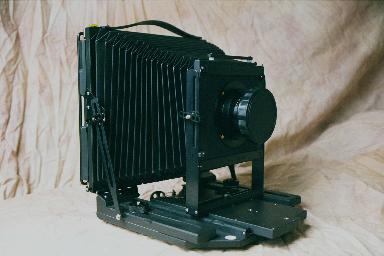 The Philips 8x10 Explorer camera is an 8x10 field camera that departs from the traditional approach to camera design and using modern technology materials and applications, results in a camera that looks like no camera you've ever seen before.

The camera is made with wood, anodized aluminum, and some high tech materials (Teflon, Derlin, epoxy coatings, fiberglass composite). The camera doesn't go overboard on technology, but uses it where the right material has benefits that few others offer. For example, the rear standard sits on the main bed with a Teflon interface between. This makes adjusting the rear standard smooth. The bed is wood coated in fiberglass and epoxy, which makes it light, very rigid, not susceptible to humidity, and has a very strong 'skin' to prevent surface dings.

The bed is made of three individual parts. There is the main bed, which has the tripod holes and is the largest piece of fiberglass-covered wood. On this sits two other pieces; one that secures the rear standard to the bed, and the other contains the screw focus mechanism and holds the front standard.

This camera is a horizontal-only 8x10 field camera. It was designed to be an extremely lightweight and compact camera for use when portability is paramount. The horizontal-only format eliminates the need for an interchangeable back, saving depth in the back, and also saving height in the overall camera dimensions. This further affects the dimensions of the bellows, resulting in an 8x10 rectangular bellows as opposed to the more traditional 10x10 on a normal camera.

The bellows are shorter than a normal 8x10 camera, measuring out to allow 21 inches at maximum extension. While this does limit the use of longer 8x10 lenses, I found no difficulty using a 450mm lens on the camera. The shorter bellows should make the use of a lens as short as 120mm easier than the typical field camera also.

Since it is a horizontal-only camera, people will need to flip the camera to the side on the tripod head to shoot verticals. There are two 3/8" tripod holes, one of them located offset to the side. This permits easier use of the camera for verticals. However, Phillips suggests this camera may not be suitable for you if you shoot more than 2% of your images in vertical format.

There are several options available on the Explorer, including an additional level, a bail lift, a mounting bar for a Toyo compendium hood, and a Lexan groundglass cover. My camera has all these options.

The camera has a large fiberglass coated wood bed with two 3/8" tripod holes. One is mounted in the center of the bed; the other is mounted off-center to facilitate the use of the camera for vertical photographs. I contacted Kirk Enterprises, and discussed getting an Arca Swiss compatible mounting plate that would bolt into both of the holes. Kirk has a plate that will accommodate this camera with only minor modifications. It is a special order, however, so lead times will be longer than usual. This plate eliminates the possibility for the mounting plate to twist and loosen when shooting in vertical orientation.

The front standard rails must be near perpendicular to the bed for the mounting screw to easily be attached, so care must be used at this point in the assembly. It does become fairly automatic with use, but you may find yourself fumbling a bit if you can't see the front of the camera. For this reason, I find the camera is much easier to set up from the front.

The lens in mounted in the traditional manner, except that the gate that holds the lens on the top pivots on a single screw, rather than sliding in tracks like many other cameras. The lensboard is a wooden Phillips 12-ply micro-laminate plywood, or a Sinar or Horseman board. Phillips notes that Sinar clone boards may not fit.

The most significant innovation this camera has is the focusing method. There is a threaded screw drive mechanism that is attached to a small universal joint under the bellows. The focus knob is directly below the back standard in the center of the camera. This U-joint allows the photographer the hold the focus knob at just about any convenient angle and easily focus the camera. One aspect of this that I have found as an unexpected bonus is that your hands do not need to directly handle the camera while focusing. This makes the focus very smooth and eliminates a great deal of image vibration on the ground glass.

Front tilt and rise/fall are adjusted with the same T-bar knobs, but I have found that is easy to adjust rise or fall, tighten the knobs partway to hold the adjustment, and then make a tilt adjustment. At that point the knobs can be tightened all the way. While loose, there is a tilt limit stop that will keep the standard vertical so that rise or fall can be adjusted independently. Front swing is accomplished by loosening the T-bar knob used to secure the front standard to the front bed piece.

Rear tilt adjustments are made using the two T-bars that were used to set the camera up. The rear standard can be adjusted by loosening the two round knobs that secure the rear standard bed assembly to the main bed. Once loosened, the rear standard can be pushed foreword to accommodate short focal length lenses, pulled back for longer lenses, or swung by going foreword on one side and back on the other. This is not an ideal system for swing, and at times using this swing can also introduce a certain amount of shift to the rear standard. However, I have found the swing adequate for the fieldwork I do. Most field photographers use little swing; tilt is much more heavily used, and the tilt mechanisms on this camera work without compromise.

The back of the camera is not removable. Since it is a horizontal-only camera, there was no reason to make the back convertible. Ultimately, this contributes to the reduced size and weight of the camera. The groundglass frame is connected to the back with a pair of stainless steel springs. As with all large format cameras, the springs are designed to exert a fairly strong force to sandwich a filmholder firmly between the groundglass frame and the filmholder guides. For this reason, the optional bail is of great utility, allowing the insertion of film holders to be smooth, reducing the chance for jarring the camera. When not in use, the bail arm clips to the groundglass frame so that it does not bounce around or stick out. I find the bail works exceptionally well, and highly recommend getting this option, even though it adds to the weight and cost.

The camera was purchased in mint condition from a reputable Midwest dealer (more on the reason why in the 'Phillips Background' Section). When the camera arrived, it was apparent that it had never been used. Because of its condition, I expect that the camera is operating as the factory would intend.

The camera is extremely rigid. Once the front standard is screwed to the bed and the rear standard tilt screws locked down, the rigidity of the system is outstanding. Considering that this camera weighs in at 5.9 pounds, the rigidity is nothing short of spectacular. The camera is only slightly less rigid when fully extended than it is in a normal assembled position. Both flexure and twist effects have been kept to a minimum through the intelligent design of the three-part bed. In this respect Phillips has not sacrificed the integrity of the system for weight savings.

The rear access focus U-joint is an excellent innovation in this camera. The rear focus knob permits the photographer to do the final composition and fine focusing without reaching around the darkcloth to the front standard. I found this feature to be very useful, and had no difficulty changing my habits to accommodate the new focus location. 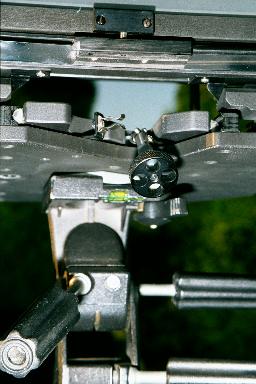 Note the round focus knob on U-joint angled downward from camera bed.

Here is a list of additional comments on the design of the camera that are worth considering:

Many companies in the industry are adding patented design features and enhancements that improve their specification sheets and add greatly to the price of the camera, but are of dubious utility for field shooters. Richard Phillips has gone the other direction with his camera design philosophy by eliminating all but the necessities. Experienced field shooters know what features they find useful in a field camera, and this camera has been designed to meet these requirements.

Richard Phillips has advanced large format camera design significantly with his marriage of high tech and traditional materials as well as his outside-the-box design approach. 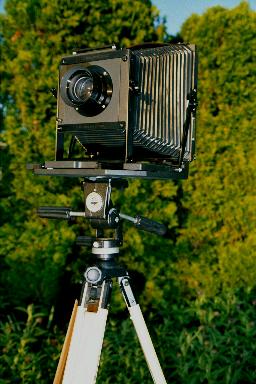 R.H. Phillips & Sons is a small company, and their ability to manufacture cameras is limited by the size of the facilities. Richard has told me that they effectively build one line of cameras at a time, and then re-tool and build another line of cameras.

This fact, along with the overall popularity of the cameras has led to some very long lead times for delivery of a new camera. This is the reason I purchased my camera used; I have an order in on an 8x10 Compact II camera but I don't expect to see that camera until 2001. Also, because of their popularity, a used Phillips camera doesn't show up on the used market very often. I found the Explorer used, and decided to get it with the intent to sell it once my Compact II is ready for delivery.

I tend to shoot enough verticals to make this camera inconvenient at times. However, by the time my Compact II is ready, I may not be willing to part with this one. The size and weight of this camera are so compelling that the benefit of easier vertical format may become less important to me. Only time will tell.

The Phillips line now includes a 4x5, (available in several different variations), the two 8x10 models, an 11x14 model, and the newly announced 8x16 model. In most of these models, options are available to permit the tailoring of the camera to the particular need of the individual.

Phillips cameras are only available direct from the factory in the United States and most of the world. They can be contacted at: