By Jared Radin for the Large Format Page

I have used the Gowland Pocket Camera for several months, and so far I'm very happy with it. I do a lot of hiking and travel, so size and weight are extremely important to me. I've made a few simple modifications to the camera and I have learned how to better use the camera with time. I am not an "expert" so as with everything on the Internet, please take all opinions with a grain of salt. I am interested in feedback, so please let me know if you have a differing or the same opinion. 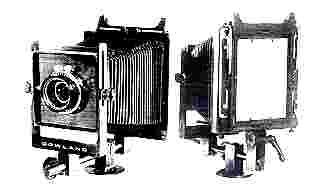 Notes about the camera design.

WEAKNESSES: WEAKNESSES WHICH CAN EASILY BE FIXED BY THE SEMI-MECHANICALLY INCLINED: CUSTOMIZATIONS FEW WOULD WANT, MAY ADD CONSIDERABLY TO THE COST, OR ARE MINOR. WEIGHT:

This gets complicated, as there are several ways of measuring the size.

More Information and a brochure can be obtained from: